Here are some of the people (and more) that you will meet in the pages of Space Kid!

Space Kid: champion of galactic justice, honorary deputy of the Space Patrol, heroic doer of good throughout the solar system of the 26th century.

Stella Anderson: computer and communications specialist of Space Kid‘s team, the crew of the S.S. Starflame.

Pizmo: robot who supplies the "metal muscle" for the team.  His face grill can double as a floodlight — other technological capabilities yet to be revealed!

Morton "Doc" Quasar:  Doc is the S.S. Starflame‘s weapons officer. Brilliant scientist and inventor, he specializes in whipping up new super-weapons such as Space Kid‘s exo-suit.

S.S. Starflame:  Space Kid‘s special spaceship. Its super-atomic engine makes it the fastest spacecraft in the solar system, and it is fully stocked with an array of super-weapons and equipment (courtesy of Doc).

Space Kid Island:  the orbital headquarters/home of Space Kid and his team.  It features the most advanced communications, detection, and defense systems in the solar system — any call for help can be heard on this satellite!

Director Charles Anderson: Director and head of Terra’s Space Patrol, and consequently one of the most important men in the solar system. Enjoys a close relationship with Space Kid and the team — also happens to be Stella‘s uncle. Referred to by one and all as "Mr. Anderson" or "Director" — but to Stella he is "Uncle Chuck!"

Sgt Lawrence: gung-ho commander of Space Patrol Cruiser One. Often called upon to assist Space Kid and the team.

SPIN agents: special agents of the Space Patrol Intelligence Network have security clearance for the entire solar system, as well as keen investigative and battle skills. They are all identical in appearance, and are all named some variant of "Smith" — yet Mr. Anderson is able to instantly and unerringly tell them apart.

Captain Manley: steadfast commander of Space Patrol Carrier One, the mightiest spaceship in the solar system.

Gamma Ray: unofficial leader of one of the crews of "mining buddies", the miners of the Asteroid Belt. A quick-draw marksman and loyal comrade. 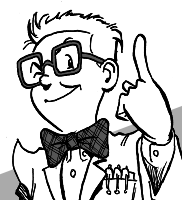 The Masked Comet: interplanetary man of mystery. No one knows where he comes from, he appears where there is danger, and then vanishes the way he came! Often seems to take a particular interest in Space Kid…

Kyzok: Venusian captain of the solar system’s most notorious band of space pirates. In their feared black saucer the S.S. Space Jackal, Kyzok and his crew are the scourge of the spaceways!

Doctor Conquest: Niles Conquest is the most brilliant roboticist that ever lived. A former classmate of Doc‘s, his fervent belief that robots should have no independent intelligence or "mind of their own" found no favor in his field and destroyed his career. Embittered, he seeks revenge on the society that rejected him!

Al Frezqo: fanatical leader of HISS, the Heroes of Independent Space Societies — a secret subversive organization which believes colonies in space should be absolutely free of Earth’s "domination"!