all out of a job 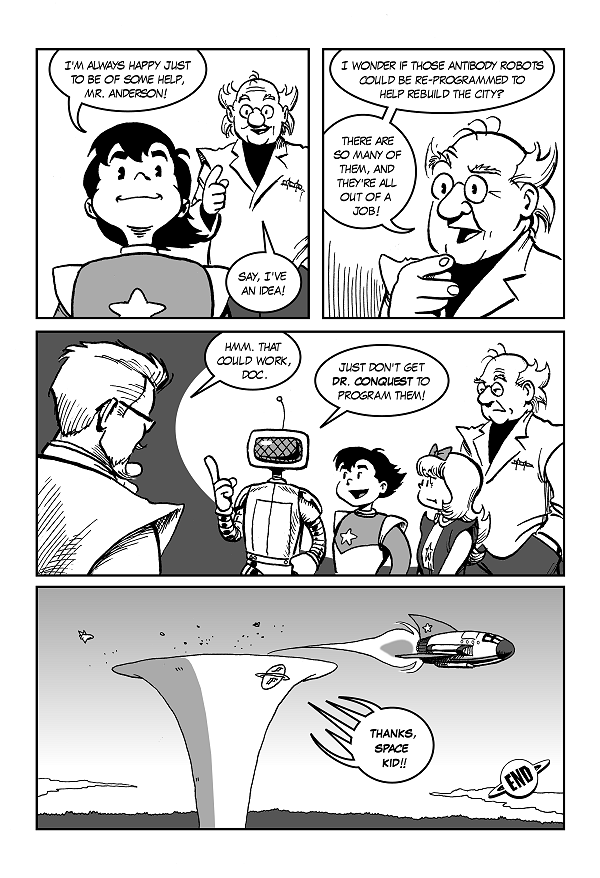 And there we have it — let’s heave a big happy sigh of relief — another episode of Space Kid comes to a close and all is well.  Hope you enjoyed this story and had some fun!

However, although the robot bugs may be out of a job for the moment, Space Kid is not!   I’m still having lotsa fun doing this, so I’ll be back here next time with the start of a new Space Kid adventure — please come back and join me for that!

not quite the way he intended 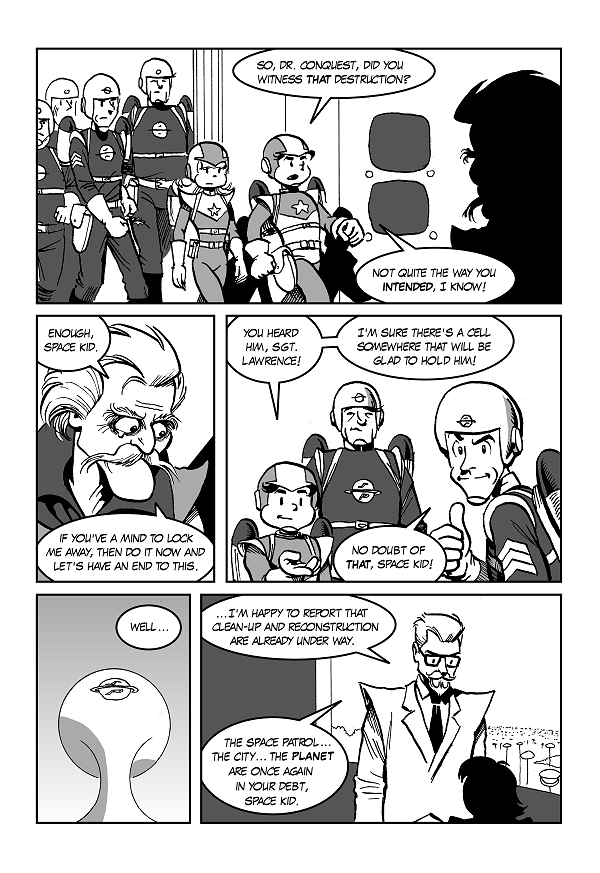 I dunno about you, but I kinda like how Space Kid takes no real delight in seeing Dr. Conquest humbled — more like a quiet satisfaction instead. Space Kid doesn’t strike me as the sort of guy who would gloat after winning — he’s too nice for that, eh?

(P.S.: I do recognize the solemn nature of today’s date, but I would still like to send out happy-birthday wishes to Kay Hanley — a creator who continues to inspire me!)

The squid is attacking … ?? 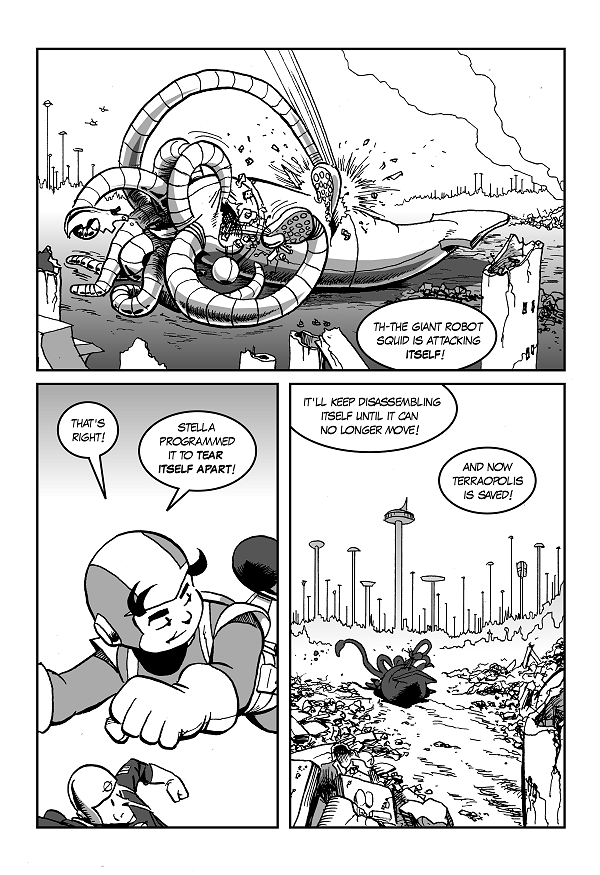 Someone pointed out to me that “getting the indestructible machine to destroy itself” was straight out of The Incredibles. True enough. That being said: 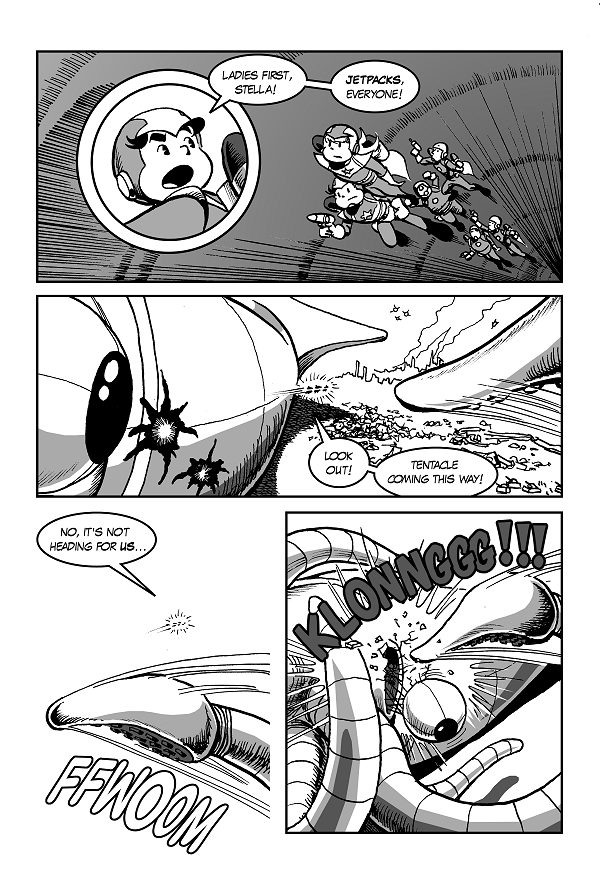 As I was inking the first panel — rendering the background in speed lines — I couldn’t help but think of Nobuhiro Watsuki, a true virtuoso at speed-line rendering, who certainly was my main inspiration to try it here. If you haven’t already checked out his Rurouni Kenshin and Buso Renkin, please do! The things that man can do with ink are breathtaking! 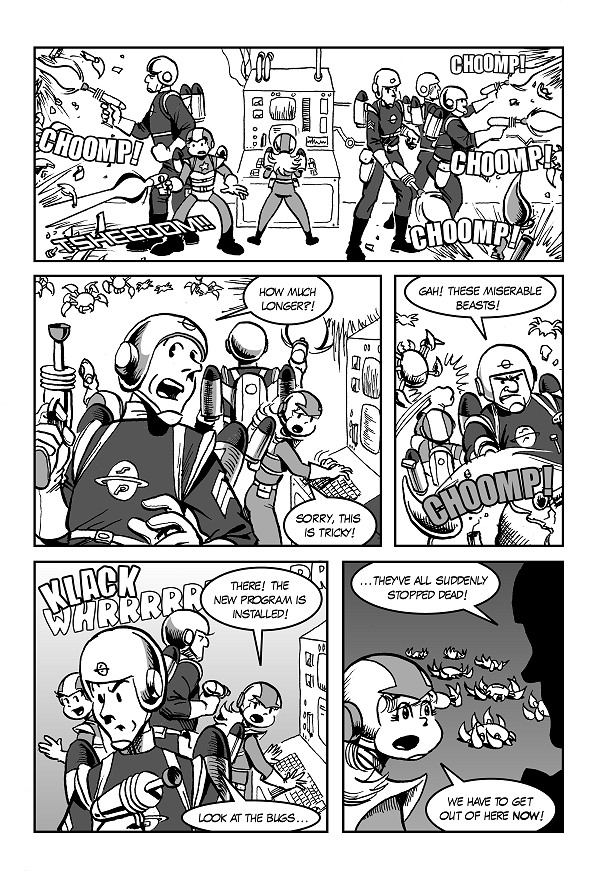 Yes, in panel 3 Space Kid is punching one of the robot bugs. It’s my little tribute to the time Marine Boy punched a stingray — a classic moment… 😛 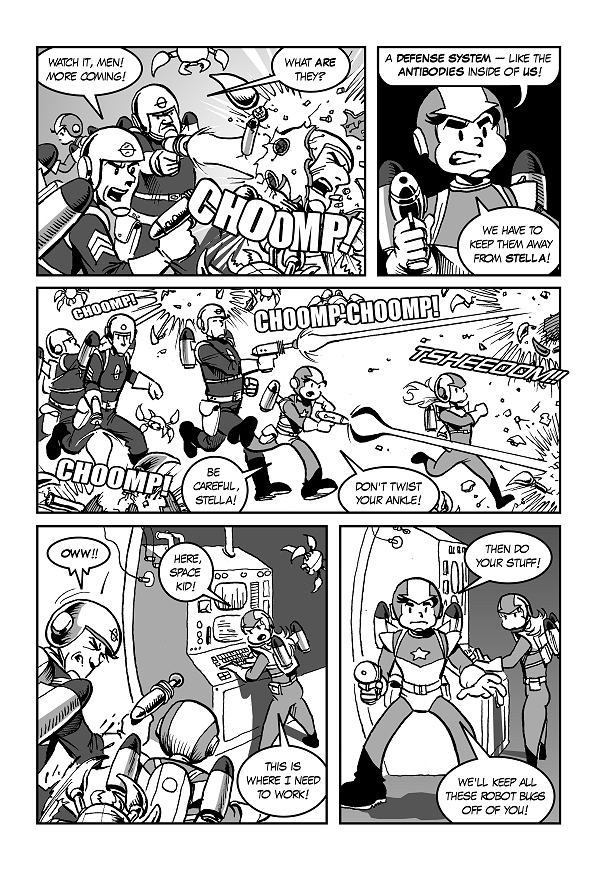 This whole notion of “travelling inside a giant body”, and “being attacked by antibodies”, can’t help but evoke memories of Fantastic Voyage for me. I saw that film back in the 60s when I was a kid, and for me there were few (if any) other films of that day which could evoke such a sense of wonder — which of course was one of the major hallmarks of the Golden Age of Science Fiction.

It took a few more years before I grew old enough to fully appreciate Raquel Welch in that film, though… 😉 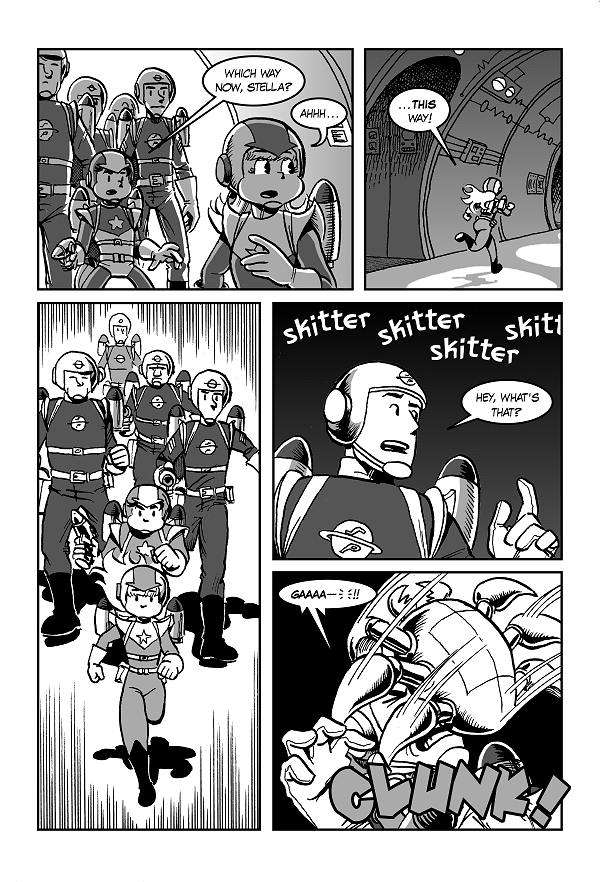 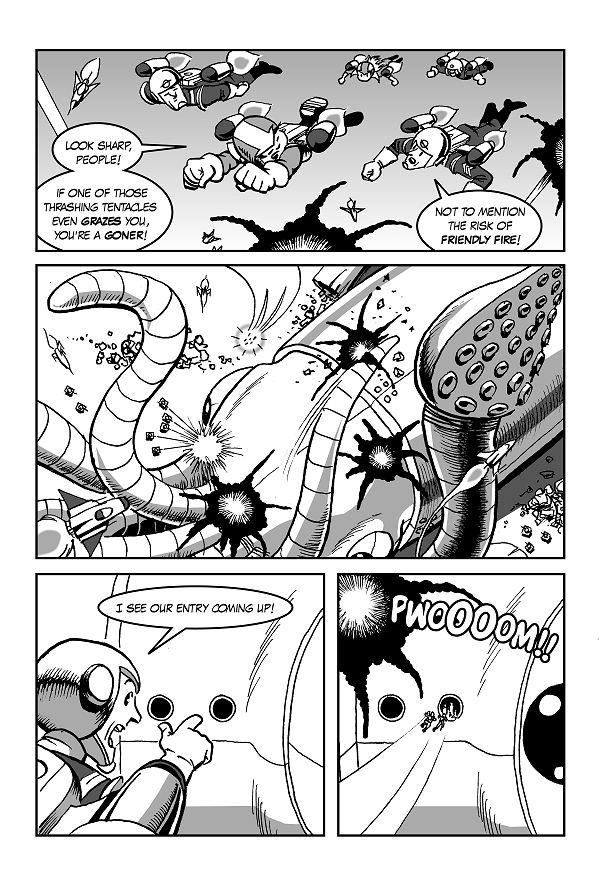 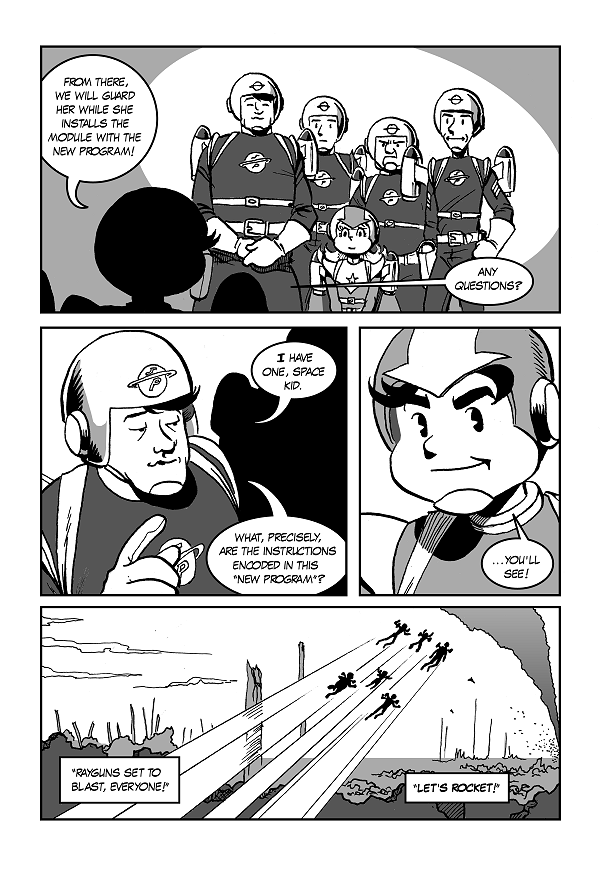 A friend remarked to me on how “gentle” this team appears, given that they are geared up to go into battle.  He went on to point out that there is no “ultraviolence” in Space Kid!

This brought home to me how comics aesthetics have changed over the decades.  The whole 80s/90s “gritty darkness”, spikes and unshaven feral snarls…  that was never what the Good Guys were about back in The Old Days — the culture that informs the look and feel of this series.  In fact [speaking only for myself], burning out on those years of unrelieved Gritty Darkness® was what drove me away from being a regular reader/collector of mainstream comics after almost thirty years.

Obviously, one of the things that inspire my work here is that a part of me misses that sense of clean heroism and swashbuckling valor of the comics of my youth.  I’m definitely not saying that all comics should still be like that today  —  I just think that some of them should still be allowed to be.  There should be room for everybody. 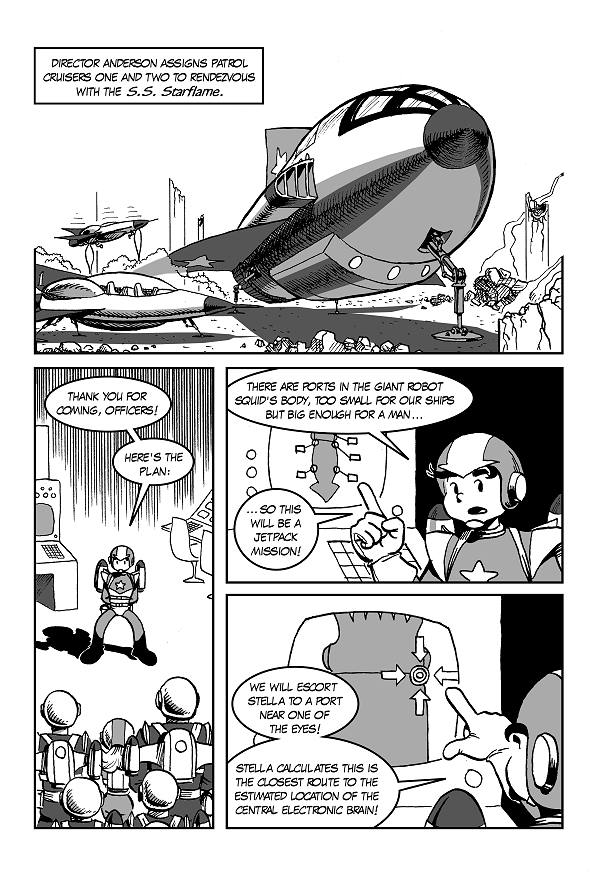 When I was little, I thought that jetpacks were right up there with the Coolest Things Ever®.  Then when I finally saw a real live one, I went even more ballistic!  However, I soon realized that real live jetpacks were not yet as cool as the ones in stories.

Forty-plus years later, and (unfortunately) real live jetpacks are still not as cool as the ones in stories!  Ah well…  😉