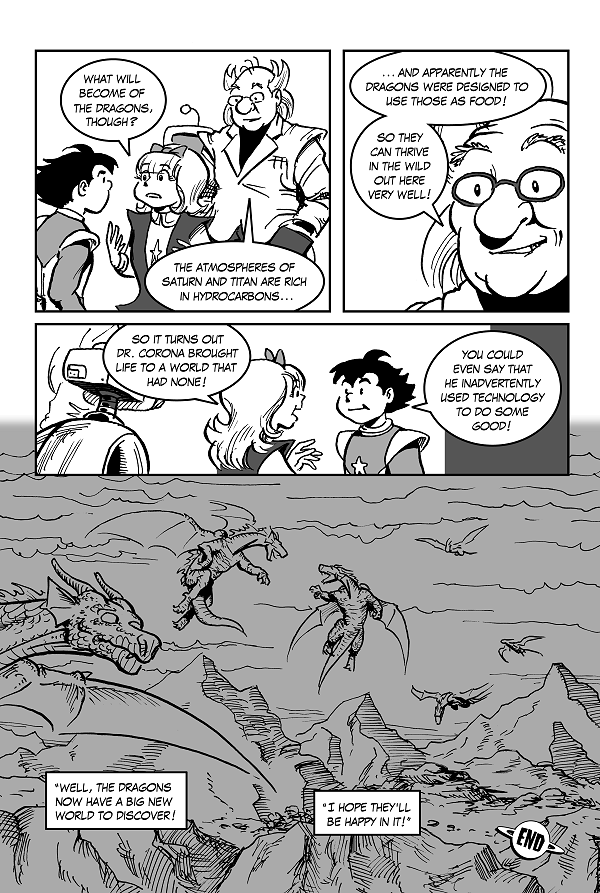 A happy ending for the dragons — and, consequently, for the team!

And now, a chance to see who if anyone actually reads these blurbs:

this is the last page of Space Kid! for the foreseeable future. There are a number of reasons for this indefinite hiatus, but the biggest one is that I have no way of getting Episode Ten written in time to keep the pages appearing weekly online — I don’t even know what the story for Ep. 10 would be right now! So going on some sort of hiatus is kind of a necessity now.

But besides that, lately I’ve been feeling like I want to try new things and learn new things… practise some technical aspects where I’m lacking, and maybe get some concrete work done on another series I have been wanting to start for over 30 years (working at it very off and on all that time). Anyway, not having a script ready is as good a reason as any to choose now as the time to take a break and do other stuff.

I also want to thank you for your interest, any of you who have read (and hopefully enjoyed) any of this series — some of you have been reading for years! I do appreciate your support very much, thanks again.

Finally, because this episode is one of the few that didn’t end with the traditional finale, I would like to say: