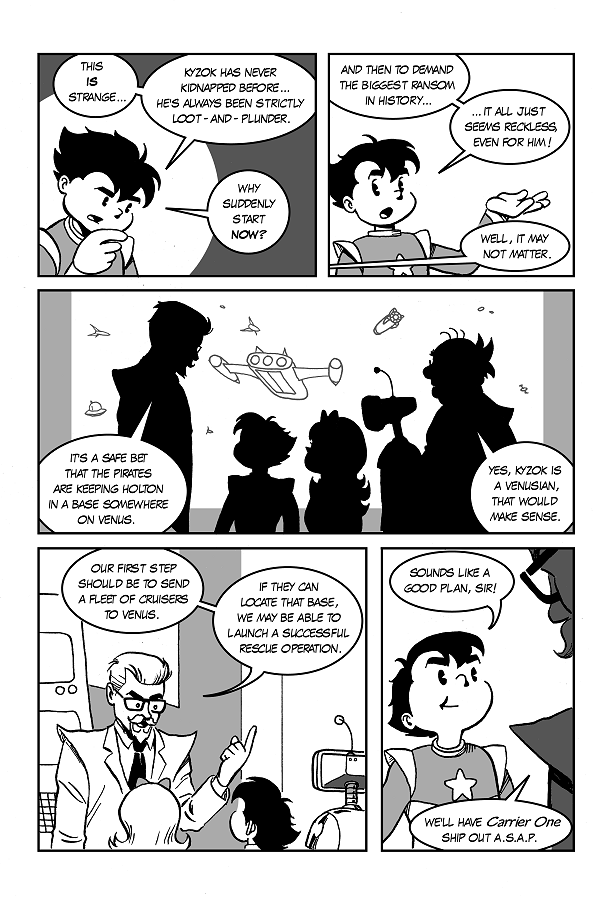 Gotta admit: panel 3 here is one of the things I’m happiest with in this series so far.  Shortly before I drew it, I was looking at some of Alex Toth‘s work, and noticed how effectively he could use foreground silhouettes for depth and drama.  And then it hit me that this would work in my upcoming panel (originally I was just gonna draw everyone in full).  So I tried it and ended up feeling like it worked very nicely.

This panel also revealed to me that I have followed a comics truism (I forget where I first read it):  “A good character design is one where you can recognize them from their silhouette alone”.  Seems to me that everyone in panel 3 is distinctive and you know who they are immediately.

Also, I had a lot of fun putting some atmospheric perspective into this panel by graying out the linework of the ships passing by the window.  I dunno if or how I ever could’ve pulled off a stunt like that if I wasn’t using computer to finish the inking.

The trick now will be for me to resist becoming so infatuated with the effects in this panel, that I start repeating them till you all get sick of seeing them.  😛